August 24, 2017
Anyone who knows me well will hardly be surprised to hear I rarely read anything light. When I burn myself out (which admittedly is often), I read nonfiction and kids’ books. But when I read fiction, I want it to be big. I mean Les Miserables big. I want a hidden meaning beneath every word. So after reading rave reviews for the obscure little titles of The Fiddler’s Gun and its sequel, Fiddler’s Green, I bought them. Mostly because they were published by the Rabbit Room, a writing community to whom I will someday contribute. (The Rabbit Room is currently unaware of this.) But anyway I stole the name of this blog from one of their books so the least I can do is give them some money.

In the first pages of The Fiddler’s Gun, I was a little bit unconvinced of this proclaimed greatness. My love for The Rabbit Room aside, it is an independent publishing platform. The creators of The Rabbit Room exclusively edit and publish their own works. Also, it was written by A.S. Peterson, a then-unmarried, large and hairy Marine Corps veteran, and features, of all things, a 21-year-old female as its protagonist.

Look at this man. How can he possibly write a thing of beauty about a 21-year-old female. 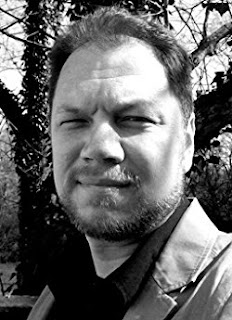 Well, I’m still not sure. But he sure as heck did it. Let’s dive into the review. After The Fiddler’s Gun finally, finally, picked up the pace, Peterson proved himself quite a worthy storyteller. I don’t really want to give away the plot, but let’s say it’s like Pirates of the Caribbean meets the Revolutionary War with a redemptive theme, and the action kicks off with the fantastically named protagonist, Fin Button, murdering not one but six English soldiers after they killed her elderly friend, a convicted pirate who had changed his ways and was living in hiding. (Things are a bit complicated, yes.) This puts her on the run. With nothing but her fiddle and a gun, Fin has to leave behind the state of Georgia and her fiancé until the war is over, now that she is wanted by the British, and this escapade leads her to the Rattlesnake and its gaggle of sailors. What follows is a nonstop adventure full of unforgettable, idiosyncratic characters and their wonderful piratey names (Jack, Knut, Topper, Tan). It contains the utterly best climactic sequence I have ever read, and after that breathless turn of events, by book’s end, Fin Button has become the captain of the Rattlesnake. Which makes her even better.

Then we come to book two, Fiddler’s Green. It took me a really long time to even form coherent words about this book except that IT IS SO GOOD. It is painful and beautiful and shocking and glorious and horrifying and perfect. If Peterson told an enjoyable and worthwhile story in The Fiddler’s Gun, then in Fiddler’s Green he has strung a masterpiece. It is honestly the best book I’ve read all year. I don’t know what to say about it though because to say even one thing is to ruin one of the many magnificently-woven surprises. The plot is fantastic, not once flat-lining or giving us an unimportant scene. The pace ebbs and flows as seamlessly as the waters of its setting. The sentences are spun like the music of its eponymous fiddler. Seriously. I read this book so slowly just to feel the harmony of each word meticulously pieced together. It is brilliant.

One thing I will say after reading other's reviews is that a lot of people seem to have had issues with Fin in this book. If you didn’t like Katniss in The Hunger Games, you’re not going to like Fin. I liked Katniss and I loved, I mean LOVED, Fin. She is young, she is broken, she is cold and harsh and real and raw and innocent. It all starts with her avenging the name of her convicted friend, and she ends up becoming him. The monster she fears. In book two, she makes horrible, horrible decisions, and the realness of it made me love her even more, and by the end, she stands up a hero. She’s lost at sea trying to find her way home. And where she finds home is unexpected and heartbreaking, but it is perfect. It could not have been done any other way. She finds forgiveness and healing and then, in turn, gives it to the last person you would expect. I could write a thousand more words about how much I love her. But instead I’m just going to say READ THESE BOOKS. It’s got history, it’s got pirates, it’s got knights, it’s got Europe, it’s got the Georgia wild, it’s got the hauntingly beautiful and insane Fin Button and her gang of secondary characters so lifelike, so ready to spring off the page and breathe, you think they surely must all have their own books out there somewhere.

I like how vague the ending is. I like how you see Fin reconcile herself and her mistakes, but then you don’t really know what happened to her. Until on the last page, inside the back cover, all on its own, in a place people may never think to look, Peterson decided to drop this in microscopic writing. 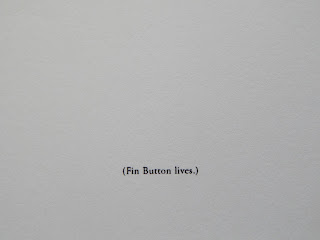 I love that large and hairy guy.

Also, Flanders Topper deserved all the wonderful things he got in the end and more. That is all.