Review of Welcome to Ludicrous

Review of Welcome to Ludicrous by Virginia Henderson 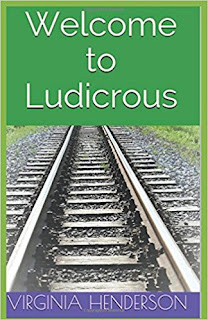 On page 37, the fussy and cynical Priscilla Pinwick describes the town of Ludicrous as a "train wreck." This could not be more succinct. I hate to use my unpublished story as an example here, but Ludicrous is a town that makes Glennerdells look normal. And yes, I just said that about a town called Glennerdells.

In fact, it was so crazy that for the first few chapters I had a hard time getting into it. But now that I'm done with my journey into Ludicrous and back again, I present the official review, the good and the bad.

The bad:
--It's a bit unpolished. Commas where there shouldn't be, incorrect grammar like "had went." Sometimes the wrong word was used, such as multiple times the word "corporate" was used instead of cooperate. Nothing major that muddled the meaning, however.

The good:
--Priscilla Pinwick's name. A+
--Food descriptions. Just for the record, food descriptions will always earn you another A+ if I am the reviewer. I always wonder what characters are eating, but in this book I didn't even have to wonder.
--Abetha is sweet, and Priscilla is hilarious yet strong. Both are enjoyable characters.
--Albert 4 life
--Female hero
--Female villain, something we never see. Another A+

But seriously. On page 43, things went from goofy to downright dark and weird, and I was suddenly glued. I like whimsy, but I love weird. I was utterly hooked at this point. If you had told me, when I started reading, that this overly quirky story about a town called Ludicrous where the butcher is a vegetarian and the florist is too allergic to flowers to sell them is actually a dystopia, I would have laughed in your face. Then I would have been ashamed.

In fact, I was at first caught off guard, because there was nothing to prepare me for the fact that this was a dystopia. Not even the blurb on Amazon:

All Aboard! Allow me to be your personal guide to Ludicrous. A small town where things are not always what they seem and are often, well...ludicrous. Take the butcher for instance. He's a vegetarian. And there's the exterminator, he's positively petrified when it comes to bugs. Then there's the mayor... I invite you to follow along with Priscilla Pinwick, an uptight, rude, and prideful woman, as she travels to this town. What could possibly go wrong?

(The answer to that last question: a lot.)


At first, I felt duped. I liked where this was going, but I also felt like I'd been handed two entirely separate books. The beginning of the story, and what it became. But by the end, it smoothed itself out and fit into place. The beginning matched the end.  It had a climax I loved, a double dose of girl power, character development that made me unexpectedly bond with Priscilla, and a sweet ending. It was a worthwhile trip to Ludicrous and back. I’m glad I took it. And I think you’ll be glad, too.

And by the way--Salisbury steak and mashed sweet potatoes for dinner!


I received a free ebook in exchange for this review. No other compensation was involved.