August 23, 2019
Welcome back to Friday interviews! Today I'm excited to introduce my interview with Gail Shepherd. Gail is the author of The True History of Lyndie B. Hawkins, a 2019 Junior Library Guild Selection about a young girl whose veteran father is dealing with the aftermath of the Vietnam War. 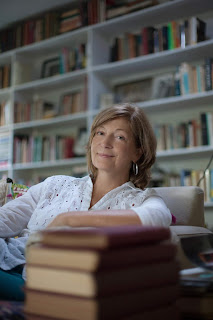 I love your book, The True History of Lyndie B. Hawkins. What inspired you to write it?

Lyndie actually started out as a very different kind of book. It was originally conceived as an adult book based on the childhood of a very close friend of mine, who grew up Filipino-American with a father who was a military man who’d been stationed in the Philippines and married a young woman there. Over time, as I revised, I moved the time period forward to 1985 to make it more relevant to my own experience, and made Lyndie a white Tennessee girl with a passion for history, which is also closer to my own life as a child of a southern family.

What are your own memories of Lyndie’s time period?

I actually grew up with the Vietnam war in the background of my life, and I think that shaped my sensibility. It gave me a healthy mistrust of the “official version” of things (remember, the Pentagon Papers, which finally gave us the truth about the Vietnam War, were copied and distributed in 1971). So I was a kid while that war was on TV, it was the first war to be televised, and the massive protests against the war were going on. I was a teenager when the Pentagon papers broke. And I was a young woman in the 1980s, in college, beginning to explore feminism and the various ways that we can re-imagine and reshape a fresh understanding of history. In the 80s we were very concerned with questions about who shaped official US history, and what and who had been left out of the stories we tell about ourselves. These are the same questions that Lyndie is exploring in the novel.

In what ways were you like Lyndie growing up and how were you different?

I had a mostly idyllic childhood in many ways. I don’t remember being bullied, for instance, and I don’t think I was an angry as Lyndie can sometimes be. But I remember my parents having problems, and other kids’ parents having problems, and me being confused about it. Kids are so helpless to control their lives, and at least in those days, nobody told us anything. So you kind of had to figure things out for yourself, you had to become an investigator if you wanted to understand your family and the world. On some level I think kids know when secrets are being kept, when lies are being told, and that can be very destabilizing.

How did you decide to tackle the heavy topics of PTSD and suicide for kids?

During my childhood we had bad things happen in the community that were never directly addressed by the adults. So for example, in one family at our school, a mother committed suicide and simultaneously drowned her two children. The adults tried to keep this information from us, but it was impossible. So it left this big gaping hole in our understanding, and caused a huge amount of anxiety for the kids who had been friends with the family. I think it’s important for families to directly address tragedies, but in the gentlest way they can, rather than simply pretending they haven’t happened. Kids know. Kids listen. And we now have children with parents who are returning from Iraq and Afghanistan who are going to be struggling and who will need help with mental health issues. It’s a family problem, not an individual problem. And beyond that, it’s a community problem. We need to give kids the tools they need to cope with tragedy, which is inevitable in life. And we need to help other kids empathize with their peers. You never really know what is going on under the surface of a person’s life. What a valuable lesson that can be for kids.

Do you have another book planned? Would it be historical fiction or something else?

Yes, actually, two! I just finished a draft of a historical novel set in central Florida, 1936, in a lumbermill town and the swamps surrounding it. The kids have an adventure in the wilderness that helps them understand how people impact the environment. And I’m kicking around another idea based on an experience I had this summer. I’m not quite ready to talk about that one in detail, but I’m making notes and keeping it on a low burner in my mind all the time.

Finally, what is your favorite breed of dog?

Oh, I love mutts! My last two beloved dogs were a Sheltie mix, Snappy, and a Shepherd-retriever mix, Marley. The story of Hoopdee’s rescue in the novel was actually based on Marley—I found her as a puppy wandering across six lanes of traffic, riddled with mange. When I stopped and opened my car door, she ran to me and jumped right in! I’m hoping we’re going to adopt another collie mix puppy in the near future. The mutts have such great personalities, at least the ones I’ve lived with and loved. I’m yearning for a fluffy new puppy! 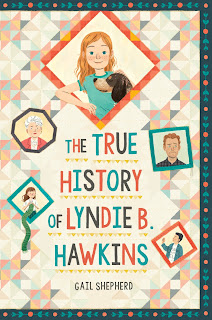 Thank you Gail for sharing your stories with us!