Happy Friday! Today I am thrilled to share the stage with the brilliant and kind K.A. Reynolds, author of The Land of Yesterday (HarperCollins 2018) as well as this month's upcoming release, The Spinner of Dreams. I had the opportunity to read an ARC of the latter (read my review of it here!) and invited Ms. Reynolds on the blog to talk about it. 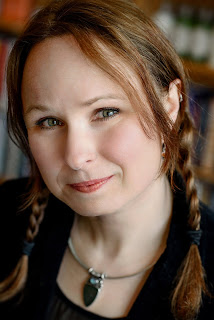 To start with, I have to compliment your world-building. I loved it. What was your favorite part about constructing the world of The Spinner of Dreams?

Oh my goodness, thank you for that amazing compliment! I *really* love this world, too—from the dark and cursed town of Carriwitchet, to the not-everything-is-as-it-seems Mazelands, to the colorful magic of Dreamland. But if I’m honest, it was the between sort of places that were the most exciting to create. Like the enchanted train of white crows that carries dreamers from Carriwitchet to the Mazelands via a crack in the curse-broken sky. That train, enmagicked together by thousands of birds, was such a beautiful challenge to write! And the sentient Labyrinth dividing the lands of Fate and Dreams fed my dark imagination and philosophic mind with such strange and deadly flora and fauna, I was in fairytale heaven. From the haunted mirrors, to the wicked plant life, to the monsters, people, dragons, and spirits, to the maze walls with minds of their own. Really, the world of The Spinner of Dreams was so much fun to build. Mostly because I let my imagination run wild. For me, as a reader and writer, there’s nothing more exhilarating than seeing what grows from past experience and dreams, hard work and imagination when authors don’t hold themselves back. When we stop thinking about what the world expects, wants, and needs from us, when we allow our true selves to shine, all the life we’ve been storing in our creative wells bubbles to the surface of the page. I think this freedom is where the true magic of story unfolds.

I found the twists and turns in the story to be plotted genuisly. (Is that a word?) How many drafts did you go through? Did the story move in a direction that surprised you?

Ha, thank you for the genuisly; I will take it whether it’s a word or not! And I’m so thrilled you liked the twists because, as a pantser, they were all organic. I’m pretty sure I couldn’t plot to save my life, but I did always have an idea of how this story would go. I knew the beginning (Annalise facing her curse), and the middle (running the labyrinth), and had a good idea of the ending (which I won’t mention here, thank you very much!), yet had zero clue what Annalise would find along the way. Say what you will about pantsers, but it’s thrilling to burst out laughing, jump in fear, or melt into a puddle of tears, experiencing everything for the first time right along with your characters. These outbursts while writing tell me that what I’m writing is true. That I’m on the right track. That hopefully, since my characters’ feelings and experiences resonate with me, they will in other readers, too.

As for how many drafts I wrote of Spinner—yeesh. A lot. Not as many as my debut, which had at least twelve . . . more like sixish I’d say? But while revising, no matter what number draft I’m on, it always feels like the ten-zillionth, and that I might die of old age at my laptop in a puddle of dried tears before the book is right or finished. Still, as maddening as writing multiple drafts can be, those later versions are where many of the secrets are uncovered. So, IMHO (she says after the book is complete and I am, in fact, not dead yet), revising multiple times is usually worth it.

Speaking of which . . . I was definitely as surprised as you were about the twist you mention later in this interview. 😊 When that key fell into place (during a later draft, BTW), I squeed with full-body chills, raised my fists, and spun around in my chair with joy. Perseverance just might be the real magic of books.

The Spinner of Dreams is about the brilliance, bravery, and beauty of atypical minds. I have Sensory Processing Disorder, also known as Sensory Integration Dysfunction. Like you, I did not receive a diagnosis until adulthood. How frustrating was it for you, pre-diagnosis, to feel like there was something inside you couldn’t control or understand—like Annalise’s Curse?

Yes, I do love celebrating the beauty of atypical minds! For me, the wait to diagnosis was hard in so many ways. Growing up with a brain, body, and emotions that didn’t work like those around me always made me feel like I didn’t belong. I felt like nobody, not my peers, teachers, or family, could understand me. As if they saw me as broken, over-emotional, shy, scared, dumb, frail, and weak, which seemed to overshadow my uniqueness, imagination, and other talents and gifts. I had no one to relate to, not even in books, and honestly thought I was the only one like me in the world, which got very lonely. And on top of all that, my dark and traumatic homelife made me feel, well . . . like I’d been cursed. I mean, if I told you my life story, you’d be checking my left palm for the Fate Spinner’s cursed mark, too!

I do want to clear one thing up though. Annalise’s atypicalness (I’m pretty sure this is not a word, but here we are) shouldn’t be mistaken for her curse. Not even close! Annalise’s mental and neurological differences are literally her greatest strengths in the battle to fight the Fate Spinner’s curse.

(Note from interviewer: I actually didn't mistake Annalise's atypicalness for her Curse, but worded it badly because I was avoiding spoilers at all costs. The Curse storyline is absolutely brilliant plotting and must be read for yourself.)

Without spoiling too much, the plot about Annalise’s Curse has a surprising twist that I found beautiful. How important to you was it that Annalise realizes her curse is actually a gift?

This book was, at times, really difficult for me to write. I got a bit dark, as Annalise and I share our anxiety, panic, intrusive thoughts, PTSD (and likely even our autism), and fighting her demons as well as my own was mentally and physically exhausting. But that’s precisely why writing this book was so important to me. It took me decades to realize that each darkness I went through and every test of fate I survived had been honing my strength like a mighty, mystical sword to get me to where I am now. Had I known the metal I was forging within me—which sometimes felt too heavy to hold—was a magical weapon, maybe I would’ve felt brave and powerful sooner? Maybe if I’d realized this sword growing inside me was the exact tool I’d need to achieve my greatest dreams, I would’ve challenged my fate decades ago and saved myself even more pain? I wanted kids and adults alike to see their own magic and strength and know that if the main characters of The Spinner of Dreams, a sweet, cursed, cinnamon roll girl, and a kind, gay, gentlemanly three-legged fox, as well as the author of this book, can face their fears and achieve their dreams, the reader can, too.

As a parent, when do you find time to write? How long does it take you to finish writing a book?

That is a good question! Because I have a p/t job and several special needs kids, I’ve been getting up
between 2 and 3:00 AM forever to write. I know; I’m bananas, right? Both The Land of Yesterday and The Spinner of Dreams took over two years to get from first draft to copy edits, most of which were scribed to the tune of owls and train whistles singing their lonely midnight songs. Some days, I may only have an hour of writing time, so it’s not the quickest way to reach The End of a book, but it still gets done eventually.

Something I’m learning, especially lately, is that I can’t make my whole life about writing books. I did this for a long time and ended up in an unhealthy place. So, this summer I decided to take a hiatus and just enjoy this time with my kids. I still get up early and feel new words whispering, but if it takes another two years—or more—to finish a story, that’s okay. Mental and physical health comes first.

I can’t conclude our conversation without mentioning this. The photos of your pets on Instagram always make my day. How many do you have?

Ha ha. I’m so happy my little fuzzballs make you happy! We have, um, a lot of pets. 😊 Chester the wizened Weimaraner; five cats—Larry, Finn, Raven, Crow, and Minnie; two guinea pigs—Jack Dragon and Charles; a mouse named Lil Girl; and a new female hamster who hates everyone called Freddy. So .. . what’s that, like ten? *cries*

Thank you so much for this fun interview, Melissa!

And hey, to everyone reading, I believe in you. May the magic of dreams be yours.

Thank you, K.A. Reynolds, for a marvelous conversation! 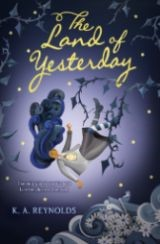 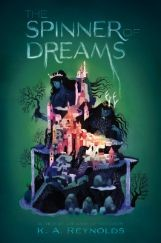 You can order The Land of Yesterday here and pre-order The Spinner of Dreams here.